I was overwhelmed, honoured and excited to have won the Design Exchange New Voices award for this new media installation, however, at the time Akemi and I were unable to accept the award due to unexpected health issues. That said, looking back at the Entity now, I realize this was one of my first Mycelium manifestations. Perhaps an evolved Entity will emerge.

wild:Entity is a collaborative installation between Akemi Nishidera and Tosca Terán, inspired by the Ohmu of Hayao Miyazaki’s, “Nausicca of the Valley of the Wind.”

wild:Entity will be grown within the Case Goods Warehouse, 55 Mill St. The Distillery as well as a smaller sub-entity (messenger) at the Design Exchange, Toronto.

An interactive, self-generating, artificial ecosystem, the Entity is a cellular world populated by collections of evolving creatures. Making and listening to sounds, foraging for food (sound), collecting things (reliquaries) and possible reproduction. Over time, Entity evolves to the landscape.

Entity can see (at short distances) and hear. The sounds you hear while Entity is running are the sounds the creatures within make. They can recognize the tonal ‘colour’ of the sound they hear and identify its direction. Through evolution, creatures learn to make sounds and to hear the sounds of others. In this way, the system creates a sonic landscape that is experienced by people within the installation space while Entity is evolving. Sound is only made by a creature if it improves the       survival of the genes that lead to such behaviour. For example, in some evolutions of Entity, creatures use sound to help them reproduce or find food. In other evolutions, they use sound to keep people within the physical space of the installation.

Entity could be considered an artificial life world that uses sound, or a generative composition system for experimental audio and image. One of the aims of the work is to exploit the emergent properties and relations between the people who experience the work and the open-ended nature of artificial evolution. The work deliberately uses simple, non-representational symbols to visualize the world, creating a kind of ‘codespace’ between land-scape and process-scape. 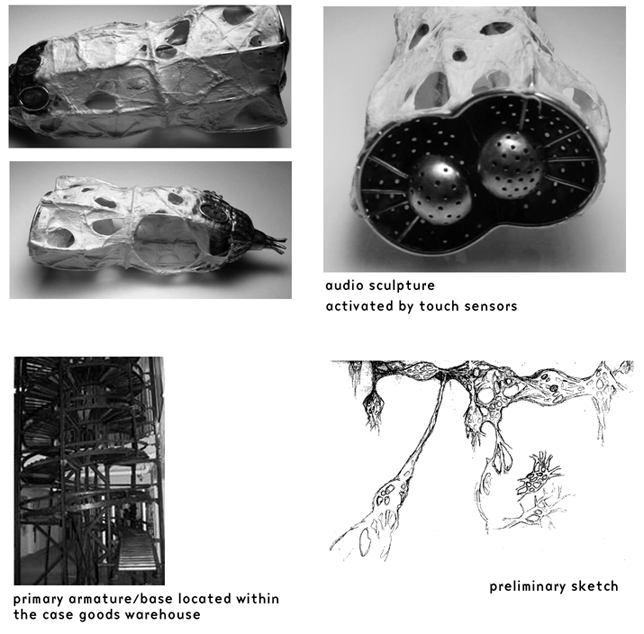 Motion sensors embedded within Entity detect the movement of people, creating a reactive relationship between the real and virtual environments. The biomass of Entity ‘feeds’ off people’s movement within the installation space. Over time, Entity adapts according to the behaviour of people in the space.

Software used to create the Entity:

Pd (Pure Data) is a real-time graphical programming environment for audio and graphical processing. It resembles the Max/MSP system but is much simpler and more portable; also Pd has two features not showing up in Max/MSP: first, via Mark Dank’s GEM package, Pd can be used for simultaneous computer animation and computer audio. Second, an experimental facility is provided for defining and accessing data structures.

“GEM” stands for Graphics Environment for Multimedia and is an external  (plugin) for the computer-music software PD.

GEM, originally by Mark Danks but now supported by Iohannes Zmoelnig, is essentially an extension of Pd that allows you to do OpenGL programming using a suite of “GEM objects”. 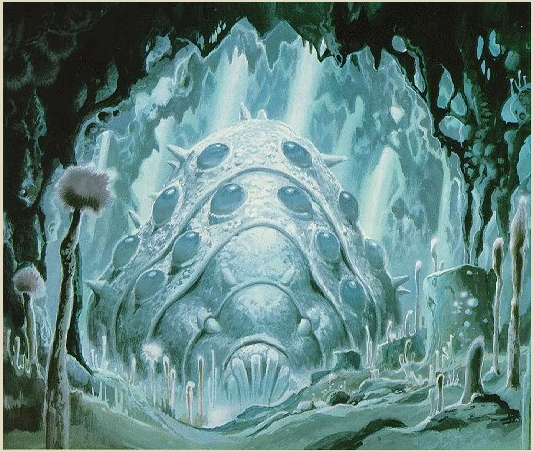 Ohmu are enormous invertebrates. Though they are ordinarily docile herbivores that feast upon the flora of the Fukai, killing any insect while in the Sea of Corruption will drive any nearby Ohmu into a berserk rage. Due to their great size, they can destroy entire settlements in this state, and the spores from forest plants which they scatter as they move can kill crops and render an area unsuitable for human life if left unchecked.

However, the molted exoskeletons of the creatures [2] are stronger than ceramics, capable of resisting most human weaponry, and thus highly sought-after as material for weapons, tools, and structures. The Ohmu possess a hive mind [3] with which certain sensitive persons may communicate.

The Ohmu are a unique creation. Their compassion is overwhelming yet at first appearance they seem to be bloodthirsty evil bugs. But the fact of the matter is that they love, and they care for their fellow Ohmu. They care for all living creatures, and they cry when they kill. They have no choice, when their eyes turn red with rage they go on a rampage, even though they don’t want to harm anything they still do.

Nausicaä encounters an Ohmu at the very outset of the story. She proves to be very good at communicating with them and can even hear their calls. Eventually, she meets a herd of Ohmu at the Acid Lakes, where she rescues a baby Ohmu. There, she is held into the air by the feelers of the Ohmu. After this, the Ohmu head south into Dorok lands.
There, the Dorok have bioengineered a fungus to wipe out the Torumekian Army. The Ohmu sacrifice themselves to spread the forest.

This site uses Akismet to reduce spam. Learn how your comment data is processed.