Chaos fungorum
an Exhibition and a Special Nuit Blanche Event
in 1747, Carl Linnaeus, known as the “father of taxonomy”, observed that the seeds of fungus moved in water like fish until “..by a law of nature thus far unheard of and surpassing all human understanding..,” they changed back to plant in their adult life.
He proceeded to include fungi in the new genus of “Chaos”. But why delimiting fungi within categories and boundaries when it is exactly their fluidity that makes them so interesting?
Chaos Fungorum draws on the particular position occupied by fungi and other hybrid organisms: neither plant nor animal, fungi extend across, and can entertain, communications and collaborations between animal, human and industrial realms.
Mixing different artistic practices and media, the artists featured in this exhibition seek to move beyond rigid comprehensions of the living by working with, rather than merely shaping, sculpting and manipulating plants, microorganisms and fungi. Letting the non-human speak is to move away from an anthropocentric approach to the world: it not only opens to new rewarding artistic practices but it also fosters new ideas of sustainable coexistence, new unusual life collaborations and adaptations, and new forms of communications and languages.
-Roberta Buiani, ArtSci Salon

I started working with mycelium towards these sculptural pieces in Iceland during a residency with Nes. At Nes I created a small installation at Bjarmanes, or rather below Bjarmanes, underground. Here I was able to track visitor’s experience with the Mycelium. People were invited to sit and listen to the hyphae as it (they?) responded to human presence in the space. These interactions inspired Primordia, work sculpted and grown towards a performance for Nuit Blanche 2018.

Primordia came to life August 3rd, 2018 and are still growing to this day. For the Nuit Blanche performance, myself and Andrei (together as Nanotopia) placed electrodes onto the living sculptures and ran their biodata through to MIDI and into seven analog synthesizers: 3 Mother32’s, 1 DFAM, 1 Subharmonicon, 1 Minotaur as well a NoCoast. The biodata that came through was off the charts! This might have been due to tension in the gallery, crowded space, CO2, even possible the Myceium may have been reacting to the excitement I was feeling.  Andrei and I mixed/recorded the synthesizers into Ableton LIVE 10. Our ‘collaboration’ with the Mycelium came from adding Reverb, occasionally adding Attack, and Pitch Modulation.

Here is an excerpt from the performance:

Primordia, 2018
Ganoderma lingzhi, Pleurotus djamor, Hericium erinaceus, hemp, kenaf, organic wheat flour, potato starch, agar. I view my research as a collaborative effort with the non-Human entities I touch, caress, grow. Having ‘minds’ of their own, my current work explores sculpting forms with living mycelium. The sculptures grow over weeks into what I view as a visual representation of the life/death cycle.
Primordia suggest large scale insects and animals, perhaps in a state of death yet, the mycelium itself is alive and growing. With electrodes placed onto the Mycelium bodies, electrical impulses are picked-up and sent through biosonification modules that translate the bio-data to midi. I take these midi signals into analogue and digital synthesizers and collaborate musically with the mycelium. Empirically, when fully connected and music is being generated, Mycelium seems to consistently generate periodic patterns that are both enigmatic but also very musical to my ear. Mycelium also seems to be particularly sensitive to the presence of people. For reasons that I do not fully understand, the Mycelium react to the proximity of some people more than others.
Anthropomorphizing the Mycelium by creating the Primordia structures, will visitors be attracted or repulsed and in turn, how will the Mycelium respond to the humans viewing them?

After the opening reception Nanotopia set-up 3 Mother32s, 1 DFAM, 1 Subharmonicon, 1 Minitaur and 1 NoCoast and gently placed electrodes onto some of the Mycelium sculptures growing in the exhibit. Reishi to midi. All of the analogue synths were being controlled by the Mycelium and Nanotopia would occasionally collaborate with the Hyphae through adding or subtracting CV, LFO, Mix and introducing the Mycelium to a Krell patch. 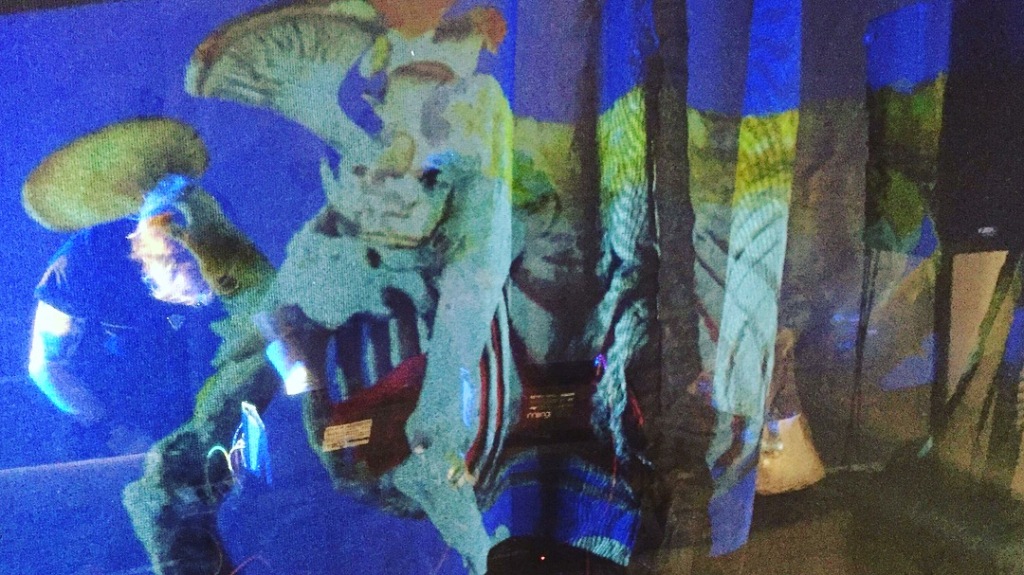 Michael Pisano‘s time-lapse, CRAWLER was being disrupted by Pleurotus citrinopileatus via a MAX patch run through Ableton LIVE.

This site uses Akismet to reduce spam. Learn how your comment data is processed.