The artists in the Winter 2019 issue are connected through the sonic mycelium of Musicworks! Order the Winter issue now.

Learn about mycelium’s amazing potential at the intersection of art, science, and technology. 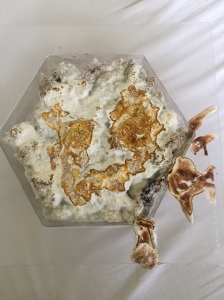 Working with Ganoderma mycelium and hardwood substrate, this workshop will include everything you need to grow a round planter, as well as hand-sculpt a small form with living mycelium! Suggestions on how to grow other forms or grow onto various armatures (3D printed, hand-knit/crocheted) will be discussed.

We will start with an introduction and demonstration of how this bio-material works, as well as discuss mycelium: what it is, its benefits to us and our environment, companies that are working with mycelium to replace styrofoam packing materials, insulating materials, everyday objects, and leather.

Participants will learn how to transform their kitchens and closets into safe mini-mycelium Biolabs.

By the end of the workshop, participants will be able to prepare mushroom media at home for art and research. They will have learned the basics of DIY aseptic technique and will leave with a mycelium bowl and bag of mycelium infused substrate!

This is a unique workshop with very limited places, so book now not to miss out.

In the end, the handy dandy Uno (naturally) works. After hours of troubleshooting with programmers, it turned out to be board issues (Trinket Pro, Feather MO). Plants will power LED neopixel strips and neopixel rings creating a moody atmosphere for the living Mycelium, that will itself create the soundscape within the dome.

Oh yeah! All done while listening to Tangerine Dream 😉 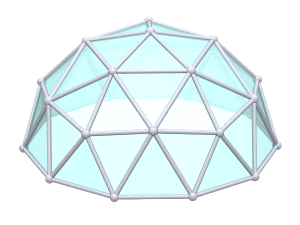 Geodesic structure made of Mycelium bricks.
For my Panspermia installation taking place at the Ontario Science Centre, I will be growing/constructing a geodesic dome using mycelium grown ‘bricks’. Using 3D printed Eco ‘Nodes’ and perhaps instead of 2”x4” lumber, laser cut cardboard can be used as supports (that hold the mycelium bricks in place), allowing the entire structure to be decomposed after the installation.

Inside the Mycelium dome not only will educational materials be available a large bio-sonification structure will also be growing within a terrarium that visitors may interact with sonically.
Alien Agencies Collective colleague, Professor Joel Ong will have mycelial bio-data, generative visualizations taking place within the Mycelium Martian Dome.

Moog Audio is generously providing all sound gear that will be used within the Mycelium Martian Dome!

is generously providing this project time and mycelium cultivating expertise in growing mushrooms and will also be assisting me in growing the mycelium brick forms.

Some inspiration:
NASA’s 3-D Printed Habitat Challenge is advancing the additive construction technology needed to create sustainable housing for deep space exploration, including the agency’s journey to Mars.
The European Space Agency is looking at Fungi Bio-composites
MoMa NY has grown a large-scale mycelium structure at its PS1 campus.

The Mycelium Martian dome
FUNGI in SPACE
It is possible to create suitable growing conditions for fungi regarding temperature, humidity and atmosphere in a space environment. An important question, however, is whether fungi are able to survive in environments with a high radiation level. Due to weak or inexistent magnetic field, the Moon and Mars are exposed to galactic cosmic
radiation (GCR), solar winds and solar particle events (SPEs). There is, however, evidence that a specific type of fungi can survive the simulated Martian conditions [10,11] and that the ionizing radiation can even enhance the growth of melanised black fungi [12,13,14]. Onofri, de Vera, Zucconi, et al proved in their Lichens and Fungi
Experiment (LIFE) that Cryomyces antarcticus and Cryomyces minteri are able to survive the simulated martian conditions aboard the Internatinal Space Station for 18 months. They found that more than 60% of the cells and rock communities did not undergo any change due to the exposure [11]. Dadachova, Bryan, Huang, et al studied melanised microorganisms, such as Cryptococcus neoformans, Wangiella dermatitidis and Cladosporium sphaerospermum and found that ionizing radiation changes the electronic properties of the organisms and enhances their growth [13]. In another study, researchers were able to provide clues how melanised black yeast Wangiella dermatitidis has adapted the ability to survive or even benefit from exposure to ionizing radiation [14]. These studies suggest that melanin pigments play a crucial role in the survival of fungi when exposed to radiation, which could mean that it is necessary to choose, either melanin containing fungal species when developing the architectural
structures for space environment, or add melanin pigments to the species which does not contain them yet.
Fungi based biomaterials could offer the following advantages over other in situ manufacturing technologies:
• Costs: Lower manufacturing and energy costs due to excluding the costs of (a) prospecting to locate and validate the accessibility of indigenous resources, (b) developing and demonstrating capabilities to extract indigenous resources and
(c) developing capabilities for processing indigenous resources to convert them to needed products
• Manufacturing: Full manufacturing loop following a cradle-to-cradle principle: the waste of another process (e.g. greenhouse) can be used as a basis for building structures, which at the end of their service period can be used biodegraded
• Mass: Light weigh, therefore easy to handle. Can be used for complex shapes
• Known to hold compressive and tension stresses. Non-flammable, waterproof, good insulation properties.
• Strength: Forms a fibrous composite with a substrate, which enhances the
material strength. Can be used for complex shapes
• Diversity of applications and products: Enables to produce a variety of different fungi based materials: from transparent films to concrete/ brick like materials
• Speed: Grows relatively fast (in general two weeks)

GROWING FUNGI STRUCTURES IN SPACE
The additive manufacturing technology is very promising technique for utilising in situ resources on the Moon and Mars. However, when using the indigenous resources, it is also important to consider the investments needed for (a) prospecting to locate and validate the accessibility of indigenous resources and (b) developing and demonstrating capabilities to extract indigenous resources, (c) developing capabilities
for processing indigenous resources to convert them to needed products, and (d) any ancillary requirements specifically dictated by use of ISRU [1]. In that case, fungi based biocomposites might offer a cost effective alternative for constructing structures in situ.
In situ manufacturing of fungi structures would require bringing seeds of specific fungi to space which then would grow into composite structures in situ. However, only a minimum amount of seeds should be brought from the Earth for the pilot structure as the seeds for the following projects would be produced in situ. The production of fungi structures could be low cost and could require only limited human assistance, eliminating therefore costly and time consuming locating, validating and extracting processes of local resources [2].

FUNGI BIOCOMPOSITES
Fungi based biocomposites are produced by combining fungal mycelium with a natural reinforcement or filler. These materials are renewable and recyclable, and are slowly starting to replace various plastics, packaging and insulating materials on Earth. The fungi based biocomposite is also being discovered by artist, designers and architects who have been successful in using these materials in many new ways [3]. Bricks and
new architectural structures have been produced with fungi [4], as well as various fungi based products [5,6,7]. The combination of 3D printing with living organisms has been studied using 3D printing techniques with organic waste, which then formed the basis for the mycelium growth. The mycelium grew through the organic waste, forming a network of interwoven roots, which then bound the material into cohesive and strong biocomposite structure [8]. 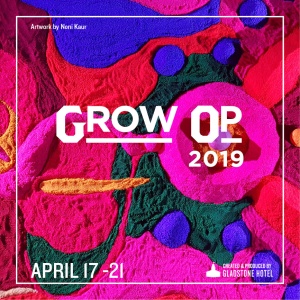 Grow Op is a four-day art and environment festival that transforms all four floors of the Gladstone Hotel with 30+ immersive installations celebrating innovative ideas and conceptual responses to urbanism, environmental sustainability, landscape design, and contemporary art. Think Allan Gardens meets Come Up to My Room!

The exhibition features adjacent events including a Clothing Swap, Repair Cafe, Artist Talk and Nature Walk! Tickets to the exhibit are $10, although certain events are free to attend!

The 2019 edition of Grow Op addresses the theme of ENERGY: clean energy, dirty energy, social energy, positive energy, negative energy, climate energy, embodied energy, resilient energy.
Do we hoard, waste, commodify, burn it, or do we store, reuse, renew it? How humans and other species live within and without natural systems of growth, change, abundance, scarcity, decay, and life. 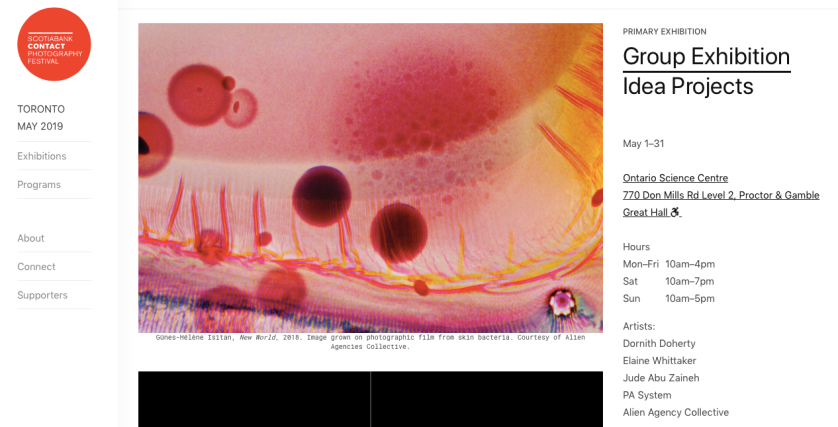 Presented in partnership with the Ontario Science Centre (OSC); Free with regular admission

Idea Projects is a product of the Ontario Science Centre’s partnership with the Museum of Contemporary Art Toronto, which provides three-month studio residencies to selected artists exploring science and technology through art. This exhibition brings together five of the resulting projects, all made in 2019, which engage science through creative experimentation and participatory activism. These site-specific installations, positioned throughout the Great Hall of the Ontario Science Centre, employ photography in ways that consider the medium’s utilitarian role in the sciences, and challenge the presumption of scientific objectivity.

With an emphasis on producing radical projects with life itself as the medium, Ontario-based Alien Agencies Collective (Joel Ong, Günes-Hélène Isitan, Nicole Clouston, and Tosca Teran) engage in a bio-art practice, mixing the non-human (microbial and mycelial) and the human. The photo-based works presented in the exhibition reflect scientific research processes, and draw attention to “alien” or unfamiliar worlds and interconnections, highlighting the aesthetic agency of non-human entities, and our entanglements with them. The images in the biomedia art series HumanScapes (2018) by collective member Günes-Hélène Isitan are recorded using the organic materiality of photographic film placed in contact with life itself, rather than through the effect of light. Contrary to “taking” a photograph, Isitan’s unique process makes it possible to “grow” an image. Instead of foregrounding an artist’s authorship, this process allows microorganisms to “paint” their presence on film, under their own agency.

Each of these multi-layered installations brings together science and art to investigate cultural and societal concerns. Unlike traditional scientists, these artists provide subjective and emotional evaluations of a complex and fragile world affected by human behaviour. Idea Projects unites two forms of inquiry and reveals the potential for scientific and artistic collaborations to reimagine the global landscape. 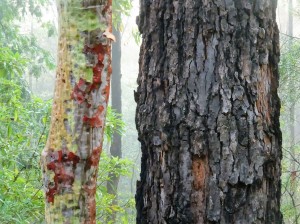 Tosca Teran is the recipient of the BigCi Environmental Award given by Bilpin International Ground for Creative Initiatives (BigCi).

BigCi is an independent, artist-run centre with a focus on supporting practising artists by facilitating their projects. Situated on the edge of the Unesco-listed Wollemi National Park, part of Greater Blue Mountains, BigCi is near Sydney, Australia.

I will be researching, working, creating July 10-September 10 in Australia. (Just a little excited over here). 😉 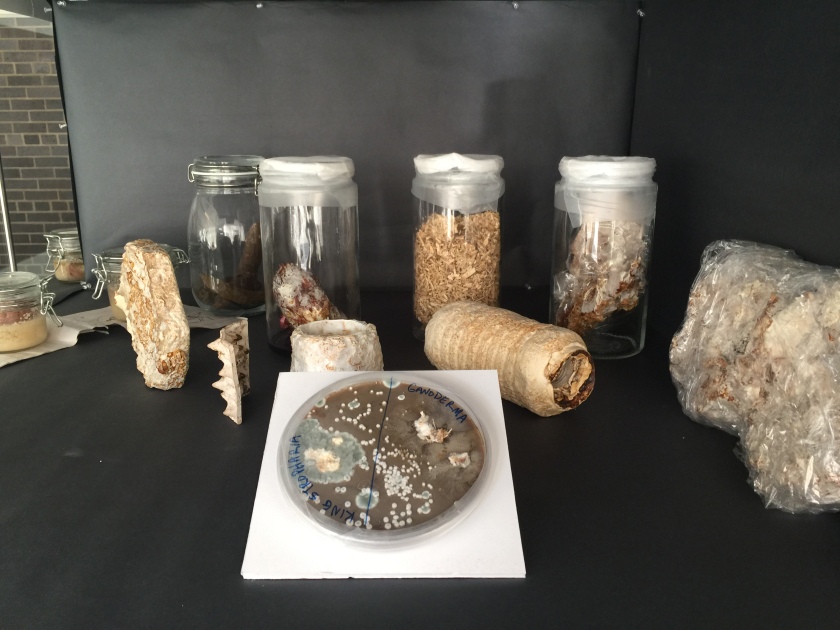 My work on display at Sydney Smith Hall UofT

So far the mycelium experiments are growing without issue. My fingers will remain crossed that nothing contaminates the hyphae! 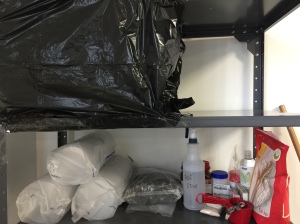 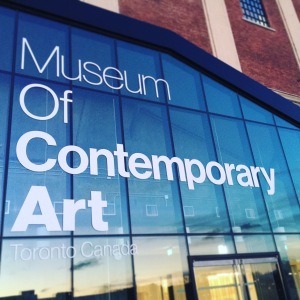 Currently working out of the Ontario Science Centre (OSC) studio at MoCA Toronto. It is Day 2 of mycelium experiments here (day 3 of working in the space). These first experiments will determine if growing mycelium in this studio space is viable without Trichoderma contamination. My fingers and toes are crossed!

For FACTT Festival of Art & Science and Grow-Op at the Gladstone, I am growing myco-remediation sculptures. Containment is still being conceptualized. 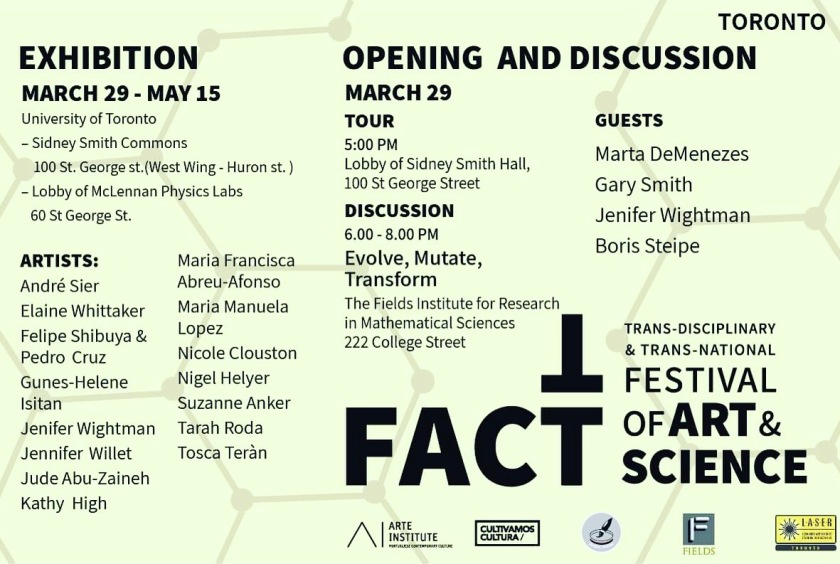